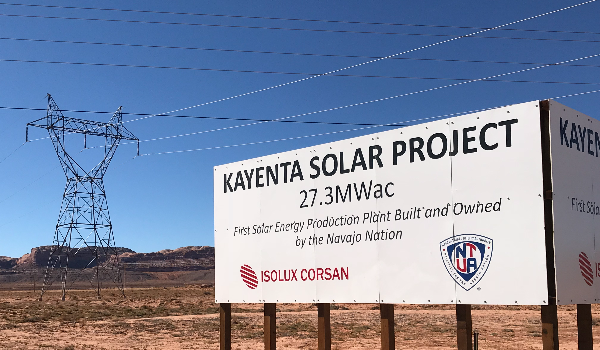 WINDOW ROCK, Ariz. — “It’s the Titanic,” a high-ranking Navajo Nation official said the other day in discussing the catastrophic course on which the economy of northeastern Arizona finds itself.

The likely closure of Navajo Generating Station, the biggest coal-fired power plant west of the Mississippi and a hugely important local employer.

The likely closure of Navajo Generating Station, the biggest coal-fired power plant west of the Mississippi and a hugely important local employer.

The plant, known as NGS for short, has been a bedrock component of a regional economy that is historically fragile to begin with and that stands to be further weakened by the loss of over 600 jobs when it closes.

NGS, which is 42 years old, has become an albatross in recent years to its utility-company owners. It is old, inefficient, and cannot compete with electricity-sector modernization being driven by lower-cost gas-fired and renewables-fueled generation.

Navajo Nation leaders, understandably desperate to avoid the job and tax-revenue losses that would accompany a shutdown, are debating whether to buy NGS outright in hopes of somehow making it economically viable. Barring such a deal, the plant, which is on Navajo land, is scheduled to close at the end of 2019.

A tribal bailout might work as a life preserver in the short term, but in the longer run is seen as a money loser, and a big one at that. A private-sector buyout of NGS’s owners was abandoned this fall after a New York hedge fund and a Chicago power-investment jointly concluded that running NGS was not a workable proposition.

The immediate problem facing the Navajo government is whether to deploy the lifeboats now or go down with the ship. That question is complicated by others, including whether there are enough lifeboats to go around, whether they are seaworthy, really whether they even exist.

The immediate problem facing the Navajo government is whether to deploy the lifeboats now or go down with the ship. That question is complicated by others, including whether there are enough lifeboats to go around, whether they are seaworthy, really whether they even exist.

If, or when, the plant closes, the nearby town of Page and its surrounding mostly Navajo communities will be hit hard. The blow will be harsh also to Kayenta, 100 miles away and the closest town to the Peabody Energy mine complex that supplies NGS, its only customer.

That mine, which produces coal owned by the Navajo Nation and linked by slurry and rail to NGS, is an obvious mainstay to the local economy, yet many residents despise Peabody for the vulgar brand of citizenship it practices. Critics point rightfully to the fact that the company, which as a matter of annual course doles out million-dollar salaries and bonuses to its overpaid brass, has offered Kayenta employees no post-coal transition plan.

To add insult to injury, Peabody seems oblivious to how its often high-handed behavior is perceived, and felt.

When Peabody relocated workers from a small community off U.S. 160 just west of Kayenta to a company-built manufactured-home project closer to the mine, a cluster of businesses at the original crossroads collapsed. A gas station, a restaurant, and a laundromat are among the junction storefronts now boarded up and grown over with weeds.

Up the road to the mine, a primitive, high-hanging water spigot meant apparently to fulfill Peabody’s contractual promises to provide fresh water to surrounding households, creaks in the wind, waiting for residents to pull up to its muddy footings and fill tanks and barrels to take home. Across the road sits a corporate airplane on a private airstrip that company executives prefer to the municipal airfield in Kayenta. A long line of pickups from nearby homes queues up at a weigh station down the hill to buy Peabody coal—for home heating. The drivers get out in turn to fill their trucks by hand. Some are old, some are young, all pay an inflated price when they file past the cashier’s hut.

In Window Rock, the seat of government, the sense of political fallout from what is happening in distant Kayenta and Page is acute. The incumbent president of Navajo Nation is in favor of buying NGS to keep it running. Candidates running to replace him in the Nov. 6 election include one who has called for shutdown and transition.

In faraway Phoenix, the state Supreme Court a few weeks ago ruled to allow a ballot initiative next month that would have Arizona get 50 percent of its electricity from renewable resources by 2030, a sixfold increase over the current mandate and a likely boon to the state’s nascent new-energy economy.

On the northern edge of Kayenta itself, the recently christened 200-acre Kayenta Solar Park, “the First Solar Energy Production Plant Built and Owned by the Navajo Nation,” connects in shiny silence to a low-humming substation that feeds the greater grid.

The plant, built and brought online in a matter of months, is considered such an overnight success that the Navajo Private Utility Authority announced in August plans to more than double its size by next year as part of an initiative to develop the region’s vast solar resources.

There lies the future, goes the thinking, that’s one lifeboat at least.