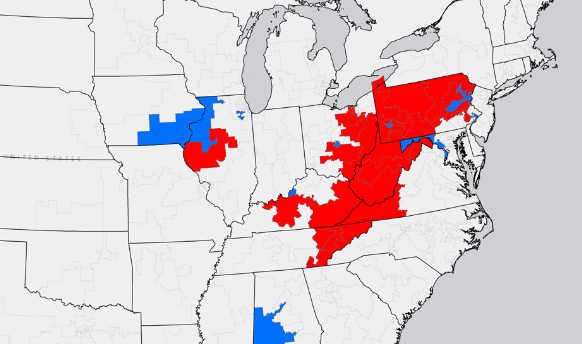 For the past few years, regional advocates have fought to secure federal investments in Appalachian coal communities’ economic future. It is often difficult, but this fight is already producing results.

Groups like Appalachian Voices and our partners, like Appalachian Citizens Law Center and BlueGreen Alliance, have advocated for investments first outlined in early 2015 in the Obama administration’s POWER+ Plan. We have called for increased funding for the Appalachian Regional Commission (ARC), coal miners’ health benefits and pensions, and passage of the RECLAIM Act.

The RECLAIM Act would accelerate the spending of $1 billion from the Abandoned Mine Lands (AML) Fund to clean up and repurpose old coal mine sites to benefit local economies. Every penny of that $1 billion has already been collected through a tax on mined coal and put into the AML Fund specifically for the reclamation of mines abandoned before 1977. The RECLAIM bill is being spearheaded by Rep. Hal Rogers (R-KY) and has 40 bipartisan cosponsors, ranging from Appalachian Republicans to California Democrats.

Considering the bill’s broad support and the urgent need in the region, the case for passing RECLAIM probably seems clear. But in Washington, D.C., nothing is that simple. The coal lobby has worked to kill the RECLAIM Act throughout the past year. Mining companies no longer want to pay the per-ton fee to clean up abandoned coal mines and, as part of their convoluted and misguided attempt to get rid of that fee, they want to take down the RECLAIM Act and anything else related to the AML Fund.

We learned last week that they are even coordinating an attempt to shed their obligations to coal miners disabled with black lung disease, which would place the financial burden entirely on taxpayers.

According to a new report from the Government Accountability Office, the Black Lung Disability Trust Fund, which provides black lung benefits to miners and their families in cases where the miners’ employer has gone bankrupt, is facing insolvency amid massive debt. If Congress doesn't take action by the end of this year, the tax that coal companies pay to keep the fund alive will automatically be cut in half—putting the fund in grave danger.

If Congress doesn’t take action by the end of this year, the tax that coal companies pay to keep the fund alive will automatically be cut in half—putting the fund in grave danger.

There is plenty of good news to counter the bad. The fight for the RECLAIM Act has helped lead to massive investments in a program designed to act as a pilot for the RECLAIM Act. To date, Congress has appropriated approximately $300 million through the AML Pilot program to Appalachian coal mining states to clean up abandoned mines and repurpose the sites to benefit local economies.

Beyond tangible results like the AML Pilot program, there is also a groundswell of grassroots and political support for economic transition in the coalfields. Coal is still prominent and powerful, but the conversation is shifting. There was a time not long ago when “transition” was a non-starter, and the RECLAIM Act wouldn’t have gained any ground with either party. But based on the map above, you can see that the bill has overwhelming support in Appalachia, especially in areas facing the steep decline in coal jobs. The map image shows RECLAIM Cosponsors; red signifies Republican held House district, blue signifies Democrat.

Appalachian Voices is proud to be one of the many organizations in the region working for a brighter, just economic future for Appalachia. We will continue to work closely with Republicans and Democrats in Congress to pass the RECLAIM Act, and pursue every opportunity for smart federal investments in our region.

Thom Kay is the Senior Legislative Representative for Appalachian Voices, a nonprofit advocate for a just economy and healthy environment in the Appalachian region.