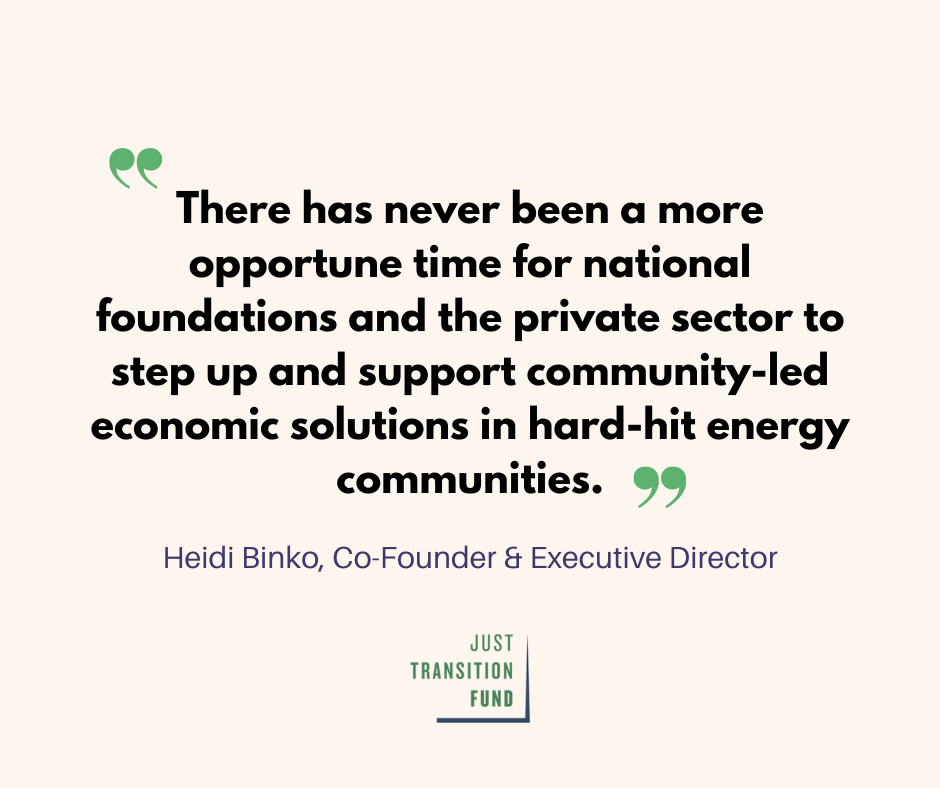 Already, foundations have made $18.7 million in new commitments toward the $100 million goal, including a $1 million contribution from Google.org to create an Energy Transition Response Center that will help communities access federal funds and engage with federal agencies to support the most economically distressed and disadvantaged energy communities. Key partners include national donors such as Bloomberg Philanthropies, the William and Flora Hewlett Foundation, The JPB Foundation, the John D. and Catherine T. MacArthur Foundation, and the Mertz Gilmore Foundation, and critical regional partners like the McKnight Foundation, the Appalachian Impact Fund, the Sugar Bush Foundation, and the Claude Worthington Benedum Foundation.

“This initiative will build upon the work of visionary place-based funders who have been investing in community-driven economic development in transitioning energy communities for more than 15 years,” said Heidi Binko. “We have seen firsthand that philanthropy provides crucial early investments in local models to prepare communities for the federal and private sector investment that's necessary for these programs to scale.”

The JTF is the only national philanthropic initiative focused solely on coal community economic transition, advancing solutions that are equitable, inclusive, and low carbon. It was founded to help communities access funds from the Appalachian Regional Commission’s POWER (Partnerships for Opportunity and Workforce and Economic Revitalization) program, created during the Obama administration. Since its inception in 2015, the JTF has helped communities access more than $124 million in public funding for local economic development.

Although the American Rescue Plan, the Infrastructure Investment and Jobs Act, and the possible passage of the Build Back Better Act will allocate billions of dollars to energy communities, successfully applying for this funding can be challenging, especially for those communities with the greatest need. The new campaign will help build the capacity of local organizations in communities impacted by power plant and mine closures to access federal resources.

“As a regional foundation serving West Virginia and Southwestern Pennsylvania, we have seen the value of providing funding to serve as a match for federal grants, which support projects that result in transformational change for the good in our communities,” said Mary Hunt, Program Director, Community and Economic Development at the Benedum Foundation.

"Communities across the country with retiring coal plants—like Becker, Minnesota—have an opportunity to rethink what their economy can look like," said Tonya Allen, President at the McKnight Foundation. "In Becker's case, they're becoming a clean energy champion, honoring their past while building their future. The Just Transition Fund will allow other communities to do the same."

"Through the whole-of-society transition to a clean energy future, we have a powerful opportunity to create new, sustainable jobs for the communities that need them most," said Antha Williams, Climate and Environment Program Lead at Bloomberg Philanthropies. "Bloomberg Philanthropies has worked over the last decade to help move the U.S. beyond coal and gas, and philanthropy's catalytic support for the Just Transition Fund will help ensure that local leaders are equipped to access critical funding and resources that will bring the benefits of the clean energy transition to their communities."

The $18.7 million in initial commitments includes more than $11 million in contributions to the JTF, which will re-invest those resources in equitable, community-led economic development through its grantmaking and technical assistance. To achieve the $100 million goal, the JTF will work closely with national, regional, and place-based partners, including key philanthropic networks like the Appalachia Funders Network, as well as government agencies and the private sector to drive investment to the most impacted people and places.

“There has never been a more opportune time for national foundations and the private sector to step up and support community-led economic solutions," said Heidi Binko. “We’re thrilled that the Biden-Harris administration has made economic transition in energy-impacted communities core to its broader agenda on climate change and environmental justice. But unless workers and families know that a vibrant future is possible in a low-carbon economy, we'll never build broad public support for climate solutions. The first step is making sure local leaders can access public investments to create jobs and strengthen local economies."