Two Nations Moving Toward a Just Transition Together 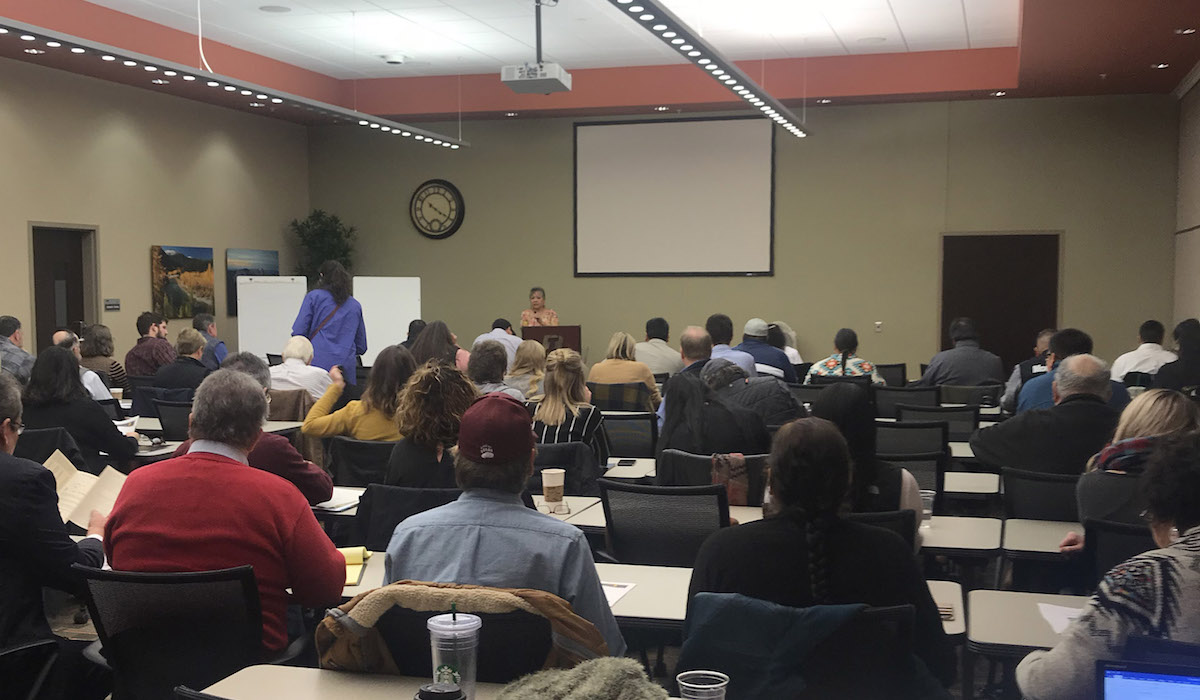 On January 7, 2020, a historic meeting happened between the Crow and the Northern Cheyenne Tribes in Montana to discuss how the communities can work together to improve their economies through workforce development.  That frigid day, the two tribes begin wading into a potential collaboration to train tribal members for living wage jobs.

Several people commented about how this was an unprecedented meeting between two Indian Nations whose common American history is the Battle of the Little Big Horn, also known as Custer’s Last Stand. The Crow allied with General Custer and the Northern Cheyenne and Lakota fought against Custer and defeated him in the Battle. Although this may appear significant in many ways from an outsider’s standpoint, the Crow and Northern Cheyenne are not the enemies they once were. Each Nation has experienced hardships from being placed on reservations. They both experience high levels of poverty and unemployment.  There has been, and still is, intermarrying between the two tribes.

A Historic Meeting at a Challenging Time

Close to 80 people gathered in Billings, including community development organizations, local, state and federal agencies, funders, college presidents, representatives from the Just Transition Fund, and others who wanted to see this effort and who were aware of the magnitude of the work ahead.

The invitation was also extended to the Colstrip community. The Crow, Northern Cheyenne, and community of Colstrip are all at various stages of feeling the impact from the decline in the coal industry.  The Crow Tribe and Big Horn County—in which Colstrip sits—rely heavily on the coal industry and its tax revenue for jobs and community development.  The decline in the coal industry resulted in  1,000 jobs lost within the Crow Tribe in 2017.  Meanwhile, the Northern Cheyenne Tribe and Colstrip were affected more recently following  the closure of units 1 and 2 of the coal-fired power plant in Colstrip.

Interestingly, on the same day of the meeting between the tribes in Billings, an editorial ran in the Billings Gazette titled “Colstrip Workers must not be forgotten.” It started by noting “Last week was a tough week for Colstrip and surrounding communities because the two oldest coal-fired power units[…]shut down permanently.  The immediate impact of this decision by Talen Energy is uncertainty for the 100 or so employees of units 1 or 2”.  The focus of the conversation has been on Colstrip, but the impact of the decline in coal has also devastated the communities on the Crow reservation.

Jobs of any kind are hard to come by on the reservations in Southeast Montana.  Skilled labor and living wage jobs are even harder to find. The primary employers for many years have been the Crow Tribal Government, the Colstrip power plant and the Rosebud mine. Both are located in Colstrip, along with several other smaller mines, including one on the Crow reservation. The recent closure of two of the four Colstrip generating units and a tenuous future for the remaining units and all of the mines has reignited the conversation and focused the need on job training for the Crow and Northern Cheyenne tribes and people in the community overall who are losing their jobs and livelihoods as a result.

There is a demonstrated need for skilled tradespeople to build and repair housing, install solar panels, maintain roads, and provide general services on and off the reservation. In some cases, the nearest tradesperson or repair facility is in Billings, more than  two hours away from some communities. At the same time, utility costs in the area are the highest in the state, resulting from a poor contract with the uncooperative local electric cooperative. Meanwhile, recent flooding and fires have compounded the gaps in services on the Crow Reservation.  The challenges are significant.

The meeting began by focusing on opportunity, with the discussion among the Northern Cheyenne Tribe and Plenty Doors CDC—the community development organization run by Crow tribal members—looking at options for expanding job training at the two tribal colleges, including one on each reservation.  While in the early stages, one option that was discussed would establish three satellite programs, with each teaching different skills. One program would be located at Chief Dull Knife College in Lame Deer on the Northern Cheyenne reservation, one in Crow Agency at Little Big Horn College on the Crow reservation, and a third in Colstrip at a rehabbed school that would serve as a training center.

Still, the challenges go beyond the history of the Battle of Little Big Horn and the placement of tribes on reservations. Job training is important, but so is ensuring people can get to the job training opportunities. It can be a very long drive on a two lane road, often in heavy snow sometimes 6 months of the year, to get from the reservations to any of these training facilities. In fact, it is 45 miles between Crow Agency and Lame Deer and 67 miles between Crow Agency and Colstrip.  One way to overcome this, that was discussed at the Billings meeting, could be to create frequent and reliable transportation to each of these satellites. This potential solution recognizes that many people do not have cars or, if they do, cannot afford to make the long trip on a daily basis.

Those at the meeting also sought to ensure the job training initiatives best suit the needs of the community, and discussed the development of a study to determine the jobs that are needed most, how best to create training opportunities for those jobs, and how to develop effective ways to market the programs to former coal workers, high school students and the community at large.

The meeting was an almost day-long effort, showcasing the needs, impacts, and resources available.  Economic development and diversification ideas were prevalent, spanning from traditional apprenticeship programs and heavy equipment repair to supporting business development and expanding an already thriving teepee business that happens during Crow Fair.

While no decision has been made on how to best improve workforce training opportunities, members from both nations expressed the need to expand on existing program offerings at the Tribal colleges.  Just over a year ago the Just Transition Fund and Plenty Doors sponsored an economic development meeting in Crow Agency to identify diversification and job opportunities for tribal members which provided some useful backdrop for this effort.

Concurrently, there will be meetings with the colleges, potential grant applications submitted to the Administration for Native Americans, the aggregation of funding commitments, an effort to line up political and tribal support, and most importantly, the work of building the trust that the end product will serve both tribes equally. The Just Transition Fund has been supportive of this effort and the work of Plenty Doors CDC.

Each community has or will be affected by the decline in coal.  Each community wants to maintain or build thriving economies. The question is how this can be done equitably.  This collaboration, with a long road ahead, can provide much needed job training and a bridge between the tribes that can help both weather the change in the economy and the long standing lack of investment in tribal nations.