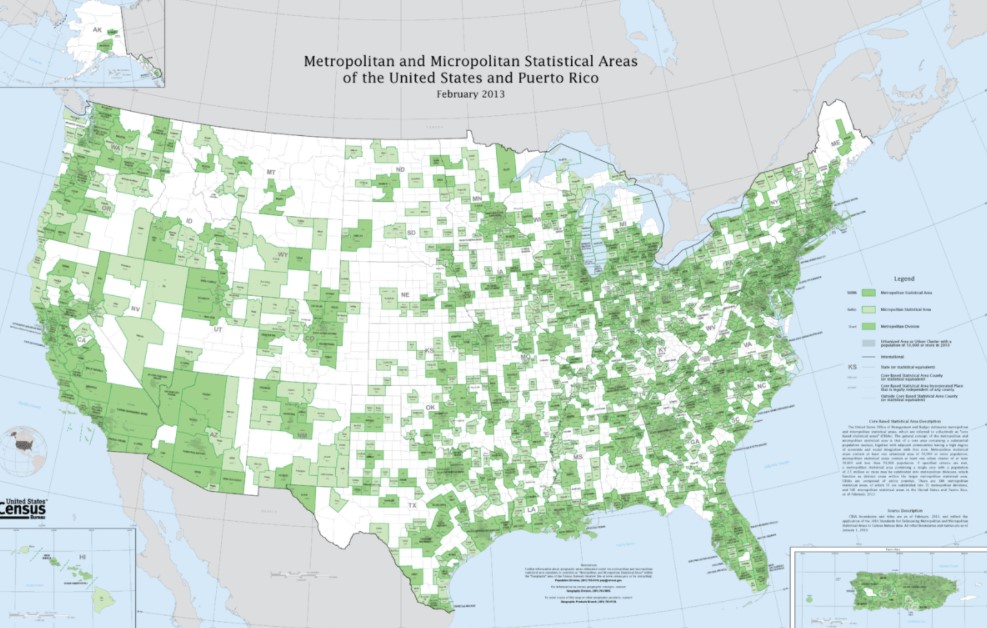 Recently, when the Biden Administration’s Office of Management and Budget (OMB) decided not to change how metropolitan statistical areas are categorized, many advocates for rural communities breathed a sigh of relief. While this may seem to some like a minor, wonky policy issue, it is a big deal for small towns and rural and remote areas across our country.

Here’s what happened: in January, the OMB recommended increasing the minimum population threshold for a metropolitan statistical area (MSA) from 50,000 to 100,000 people. This would have been the first time the minimum population size necessary to qualify a place as an MSA  was redefined since these areas were first delineated in the 1950 U.S. Census. By making the population threshold higher, many mid-sized areas would be bumped out of the MSA categorization -- and therefore be grouped with smaller towns and rural areas. In fact, 142 current metro areas including 251 counties and nearly 19 million people would be bumped into “non-metro” status.

Why does that matter? The change isn’t just a formality -- it would have major consequences for rural places. These new additions to the “non-metro” category would sharply increase the competition for resources that already disadvantages rural communities by bringing larger, wealthier counties into the same category as these rural areas. A number of federal programs use the metro and non-metro designations to allocate program funds.

According to powerful analysis from the Brookings Institution, these potential new additions have a lower poverty rate, higher education rate, and contain more prosperous zip codes collectively than the smaller areas already in the “non-metro” category. Moreover, they are significantly larger than existing non-metro counties, with a mean population of nearly 50,000 more people per county. Adding these counties to the pot of “non-metro” communities could mean rural and remote places with small populations would be competing with wealthy, larger communities with more capacity to pursue federal resources and funding. With many of these smaller communities situated in counties with majority populations of people of color and high poverty rates, this proposed change by OMB could have multiplied challenges and exacerbated existing racial and economic inequities.

That’s why so many rural advocates spoke out against this change and suggested a better path forward. 430 groups signed onto a letter led by the Brookings Institution and the Aspen Institute urging OMB to reconsider.

“We strongly recommend undertaking a process that considers changes to the definition holistically – looking at density, commuting patterns, size, and regional economies as an integrated whole – through a robust, consultative, scientifically sound process that involves external researchers and practitioners to illuminate the full scope of potential consequences for rural communities and rural-urban regions,” the letter reads. “We urge that OMB, rather than making a consequential, piecemeal change to the MSA standard based solely on internal technical review and recommendation, undertake a comprehensive review that establishes a sound scientific basis through external analysis and review by researchers, demographers, and experts, involving rural practitioners and experts at each juncture.”

Thankfully, OMB did not implement the change. This month, the agency indicated it would maintain the existing definition of an MSA -- and we applaud this decision.

Rural communities are already facing many structural challenges that larger communities do not, with industries shuttering, revenues declining, and jobs being lost. Resources and capacity can be hard to come by, and the COVID-19 pandemic and the resulting economic crisis disproportionately made these challenges harder. This ill-advised change in MSA designations would have done the same. We’re grateful OMB listened to rural communities and reversed course. Now, we urge OMB -- and every government agency on every level -- to consult and collaborate with rural leaders and advocates who know the challenges first hand and have innovative, outstanding ideas with which to solve them.