Planning and mobilizing for new business:

Planning is everything. By starting early, being inclusive, and thinking creatively, Becker successfully attracted new businesses years before the first of three power generating stations will close. 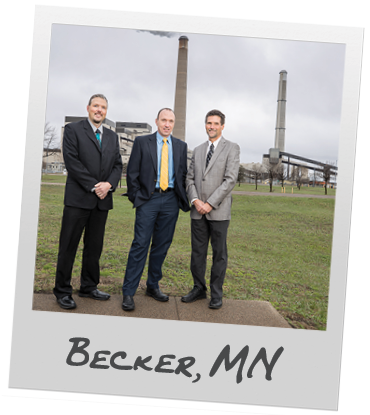 Greg Pruszinske saw the writing on the wall. He heard the federal and state conversations about the importance of reducing the nation’s carbon footprint as early as 2005. He saw the Minnesota Governor set carbon reduction goals for the state soon thereafter. And then he watched as the local utility in the City of Becker adopted similar goals for the company with the impending closure of two of the three units at the Sherburne County Generating Station (SHERCO) in 2023 and 2026, and the proposed decommissioning of the third unit by 2030.

At one point, SHERCO supplied 98% of the tax base that served Becker’s 5,000 residents. The closure of the first two units will mean the loss of 150 jobs and the potential for the town to lose up to 75% of its tax base.

As the City Administrator in Becker, Pruszinske knew that his city needed to start planning. Fortunately, other town leaders agreed with Pruszinske and took early action. Conversations began seven years before the first of three generating units was to be shuttered, and representatives from Becker began to visit and learn from other communities that had undergone the same thing.

Together NACO, NADO, and EDA created a three-day workshop for a team of stakeholders from Becker to discuss the town’s current position, the timeframe for transition, and what they could do to ensure their future.

“We walked out with a high-level strategy for transition,” says Pruszinske. “Then we took an inventory of all the assets present in our town and how to leverage them.”

Those assets included thousands of acres of buffer property owned by the power plant, an abundance of underground and surface water including the Mississippi River, a main railway line and two additional local spur tracks, and the city’s location within a robust transportation corridor. There was also plenty of access to power from a nuclear plant across the river and existing transmission lines at the plant. Once they understood the community’s existing assets, Pruszinske and the stakeholder team envisioned a large-scale business park that would bring new jobs and sustainable growth to Becker.

The Critical Importance of Planning

Pruszinske credits the town’s early start, long list of collaborators and the attention to planning for its success.

“The number-one thing you need is a plan,” he says. “We developed a land use plan, a parks and trail plan, a transportation plan, and a rail impact study. To get the state and federal money that was available, we needed to do some engineering and put some thought into it. Having a plan for all the different pieces is key.”

That planning process not only included groups from the immediate community, but also from the surrounding townships, the county, and other nearby communities – tackling the problem not just from the city’s perspective but from a regional one. For example, a transportation study included three public meetings to review ideas for transportation connections. The park and trail plan included a broad section of community members, including those who had not been engaged in the past. Becker city officials also encouraged Sherburne County counterparts to conduct outreach in Becker for its own planning efforts.

Engagement wasn’t always easy. Residents were often in denial, relying on the fact that a plant that powered a quarter of the Twin Cities could never close. Pruszinske and his colleagues had to “keep pounding away at the message.”

“We got the word out to as many community events as we could, and always allowed time for questions and comments,” says Pruszinske.

City leaders also met with local and state legislators to bring them into the conversation and engaged Xcel Energy (Sherco owner) to build trust and open lines of communication.

“Building trust and handling sensitive information is imperative,” Pruszinske says. “Our utility was very candid about the direction they are going in the context of carbon emissions and because we had a strong relationship they included us as stakeholders and were willing to include Becker in the conversation.

The city also made planning a priority by carving out some of its own budget to support the activity. Then, they pursued state, federal and private matches for planning. They also focused on finding the expertise they’d need for planning: financial, engineering, grant-writing, financial modeling, and more. That effort took staff time as well as money, and Pruszinske urges other cities to dedicate either full time staff or consultants to the work of leveraging funds and expertise for the planning process.

Becker’s plan was rooted in a strong desire for new business development. “Everything was on the table,” says Pruzinske.  “Be confident in changing the rules if you have to – at any level. We were willing to change zoning or land use, within reason, as part of our planning, but we also tried to align our planning with the county and other communities to make it easier for contractors and businesses to work within the rules. Instead of saying ‘We can’t,’ we asked, ‘Why can’t we?’”

Pruszinske also hit the road to recruit alternative industries. “I go to many state-level conferences. I talk about opportunities in Becker and engage with anyone and everyone.”

He says it took about three years of conversation to gain traction, but that work is beginning to pay off. Today, Becker has a new recycling company that was attracted by its rail line, two trucking companies, and a data center that is in the works. Instead of worrying about the closure of the power plant, Becker is focused on investing in the infrastructure it needs to prepare for the new business activity.

“I come at it from the standpoint of ‘no one is going to take care of me like me,’” says Pruszinske. “It’s up to us to do this to take care of our community. We had a willingness to put our money where our mouths are. Then we focused on collaborations, collaborators, and opportunities to partner with federal agencies, the state, and private nonprofits,” says Pruszinske. “That’s what a just transition looks like.”