Innovative workforce development programs
that meet people where they are at, including: 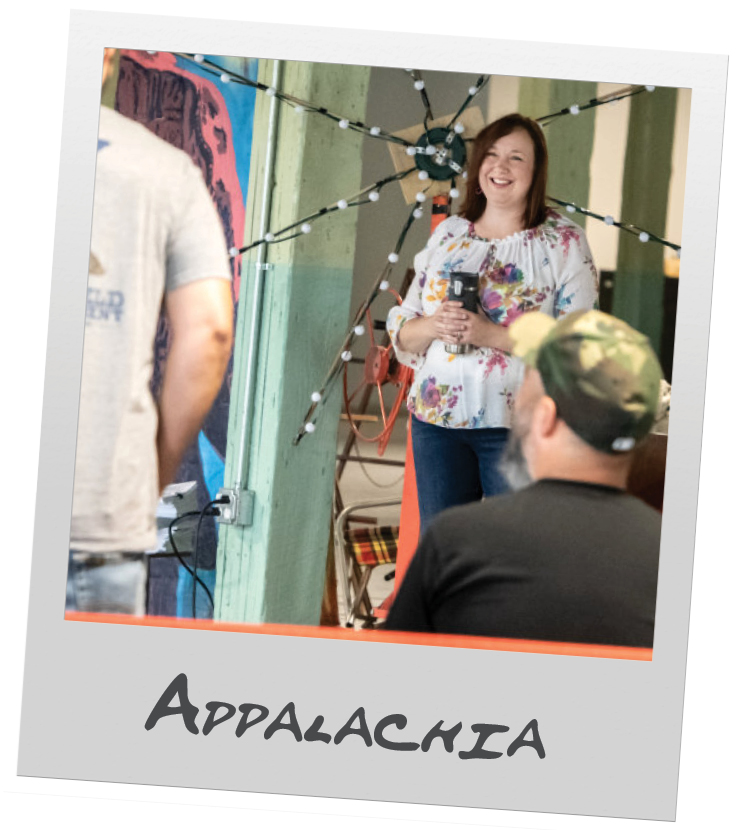 Coalfield Development builds jobs with a focus on relationships. It’s a longer-term approach designed to create a sustainable path forward for communities emerging from coal-dependent economies.

“We work with people for two-and-a-half or three years, or longer,” says Marilyn Wrenn, Chief Development Officer. “It’s not a quick process. The communities we work in often don’t have employers. Instead, we use our own social enterprises to work with individuals until they finish their associates degree or have a long-enough employment span with us that they’ve developed deep, highly transferable skills that are in demand across the region.”

Coalfield Development takes a three-pronged approach to transition work. One is real estate development, developing the physical assets in a community. The second is social enterprise, offering jobs for workers in construction, agriculture, or solar that in turn deliver positive benefits for the community, such as affordable housing or increased access to healthy foods. The third prong is a focus on the development of people, through the attainment of an associate’s degree or higher. Participants take part in a “33-6-3”plan: 33 hours of work, 6 hours of course credit toward a post-high-school degree, and 3 hours of personal development each week.

For example, in Williamson, WV, a town with a long history of low employment, high opioid use, and little redevelopment activity, Coalfield Development worked in partnership with a physician and social entrepreneur who wanted to create a Federally Qualified Healthcare Center there. Coalfield Development leveraged that opportunity to bring in its construction and agriculture social enterprises, and hired several local people for each effort. Construction crews worked in redeveloping two downtown spaces for a community gym and a meeting area, as well as increasing space for the new health center. In addition to construction, crew members learned valuable historic preservation skills in the process.

“Several folks involved with those crews went on to pursue associate’s degrees and were hired by other employers,” says Wrenn. “Some did leave the area, and some transitioned to other crews.”

Coalfield’s agricultural enterprise, Refresh Appalachia, began working on a 400-acre former surface mining site to explore options for raising animals and crops. The remote nature of the site proved to be too much of a challenge, so instead the agricultural crew returned to Williamson to develop community greenhouses. Now, they are creating a commercial initiative to deliver fresh food to diabetes patients. Produce that’s not used within the community is sold to another partner, a food aggregator.

“They created an asset in an area that’s a food desert,” says Wrenn.

The goal of all Coalfield Development enterprises is to break even and ultimately generate revenue. For its construction projects, Coalfield serves as a licensed general contractor and receives developer fees. It also owns and operates several rental properties that generate revenue. Some of these properties crews built from scratch, others they purchased and renovated to meet community housing needs.

Through construction, Coalfield moved into solar in an effort to keep energy costs down for one of its buildings. In

partnership with Solar Holler, a regional private company, it trained employees to become solar installers. This led to a new enterprise, Rewire Appalachia, which was eventually acquired by Solar Holler. The company still works with Coalfield to train new installers.

Each Coalfield enterprise generates a portion of its revenue that the organization can use for wages. It also works with state workforce programs to offset wage costs. But because of the social development aspects of its work, Coalfield also relies on philanthropy and government support to offset the costs of training and professional development. The long-term goal is for enterprises to cover 100% of the cost of business.

Meeting Workers Where They Are

Not every new worker is initially up to the challenge of Coalfield’s 33-6-3 plan for development. Some just want a job.

“We found that our 2.5-3 year commitment to pursue an associate’s degree while working is too much for some people right off the bat who haven’t been in the economy for a while,” says Wrenn.

This was particularly true for unemployed youth as opposed to older workers who had been employed in the past. So, Coalfield developed a new training mechanism called Workforce Readiness and Professional Success (WRAPS). WRAPS is a six-month experience combining paid on-the-job training, professional certificates, and some professional and personal development. Participants are paid $11/hr for 33  hours a week.

“We’re essentially paying people for six months to help them identify and overcome barriers to their own employment success, while giving them basics to step up into one of our enterprises or to work for another employer,” Wrenn says.

WRAPS helps participants obtain essential documents like federal IDs or drivers licenses, and master basic components of financial literacy, like opening a checking account and understanding how taxes work. These skills are essential to helping participants move out of poverty.

WRAPS also helps participants understand employment readiness issues like timeliness, attendance, dress, communication with a supervisor, and professional communication in general. At the end of six months, most emerge ready to join one of Coalfield’s crews and balance the challenges of work and school. Some realize they aren’t ready for school, but take their new skills elsewhere and come back later.

“We want to help them feel like they have options, then give them time to process them,” says Wrenn.

The current cohort in Charleston, WV’s historically Black and underserved Westside area is focused on low-voltage wiring
and fiber optics cabling – skills that are in demand among employers in the area.

One key to Coalfield Development’s success is its ability to adapt to the needs and interests of both communities and employers. Although the social enterprise model is a constant, the kinds of training and product or service it delivers can change.

“We know just going into a community and saying ‘we’re here to help’ doesn’t work,” says Wrenn. “We will always engage with local partners and figure out how to meet them where they are, then figure out solutions combining our three areas of real estate, social enterprise, and human capacity development. Appalachians are good at fixing things, building things and growing things, and we are trying to build on the skills people already possess.”

This kind of flexibility is better than all or nothing, according to Wrenn, because it helps people see that they have options – which in turn combats hopelessness. That’s what unlocks creativity and lets people see what can be done.

For example, “We’ve not yet found a need or partner for fixing drones, say, but if someone did, we might look at what setting up an enterprise for training drone repairers might look like, and what the outcomes would be.”

Unlocking creativity in times of trauma is a
value that is deeply embedded in the work at Coalfield Development.

“We talk openly about that with our crew members and trainees and engage with them about how they see things and encourage them
to talk to others in their community,” says Wrenn. “That’s really intentional. Those who work
with us become ambassadors of the community transition, ushering in the new
sense of hope.”