The inclusive, community-led process to create the Tonawanda Tomorrow Economic Development Plan provides a model for other cities and towns facing similar “energy transitions.” Working as a coalition, the Huntley Alliance was able to create a plan that spells out how Tonawanda can sustain its tax base, provide family-sustaining jobs, improve citizens’ health and link the town to recreational opportunities on the Niagara River waterfront. 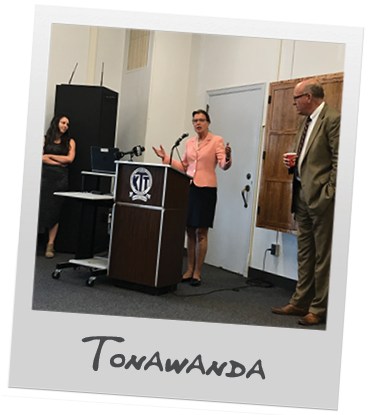 Rising from the Coal Ashes

The Town of Tonawanda in Erie County, New York, covers 20-square-miles in the suburbs of Buffalo. Its 73,000 citizens pride themselves on having a strong work ethic, affordable housing, safe neighborhoods, schools and recreation centers, and a top-flight paramedic service.

A significant amount of Tonawanda’s success was long tied to the Huntley Generating Station, a hulking coal-fired energy giant that straddled 102 acres on the Niagara River, just 13 miles from storied Niagara Falls. Huntley had been a fixture in Tonawanda since 1942. In 1999, the plant was purchased by NRG, an independent power producer headquartered in Houston and Princeton, N.J. In 2006 and 2007, NRG halved Huntley’s total 760-megawatt capacity. In 2015, it announced Huntley’s impending closure and began the decommissioning process in 2016.

News of the impending closure received mixed responses. Huntley Generating Station had long been Erie County’s most prolific air and water polluter, so environmentalists were ecstatic. Also, many neighbors were relieved because they attributed their respiratory problems and other illnesses to their proximity to the plant.

The school district was already pinched by shrinking state funding, beginning in 2009. Over the next several years, belt-tightening and labor concessions weren’t enough to prevent layoffs of 140 teachers and the shuttering of three elementary schools and one middle school. Teachers’ pay was frozen to save jobs.

Tonawanda residents saw the writing on the wall before NRG announced complete closure, and they responded by forming The Huntley Alliance in 2013, a community collaboration spearheaded by the nonprofit Clean Air Coalition of Western New York, the Western New York Area Labor Federation, AFL-CIO and the Kenmore-Tonawanda Teachers Association.

GROWING PAINS: Initially, when the Alliance formed in 2013, it included the union representing the 70 or so workers at the shrinking power plant. But the union representing those workers walked away when a local Sierra Club member organized a protest calling for Huntley to close. Workers felt alienated when demonstrators wore union shirts at the rally. The fractured Alliance, frustrated and unable to forge ahead, went dormant for months.

A wake-up call came, in the form of a January 2014 report commissioned by the Clean Air Coalition. It clearly stated that Huntley’s demise was imminent because the region had an excess of energy capacity and soon, the plant would be operating at a loss. That sobering news prompted Alliance members to regroup around the belief that an effort to save their community had to come from within.

Alliance members realized they had an opportunity to find other ways to shore up their tax base, recruit new employers, make their waterfront an attraction and keep their schools open by building upon a strong sense of community identity that already existed. They also were driven by the desire to protect the health of their residents and the surrounding environment because the plant had long been a prolific polluter of the air, water and soil.

This time around, the plant’s union elected to stay out of the effort.

EYES ON THE SOCIAL JUSTICE PRIZE: The Clean Air Coalition had built its reputation holding major polluters accountable along Tonawanda’s gritty, industrial waterfront. Rebecca Newberry added a strong social justice component to the coalition’s mission when she was named executive director of the Clean Air Coalition in 2015.

Newberry carried those same values to her leadership role with the Alliance. She insisted that Alliance leaders create an internal culture of trust if they were to lead their community forward.

“Always, our key question is, how are we going to take care of our people?” she explains.

As the reconvened Alliance figured out how to shape Tonawanda’s future, they also rallied around Newberry’s guiding principle that workers can’t be left behind. That approach began to birth unlikely bonds. For instance, teachers rubbed shoulders with steelworkers and teamsters. Labor and environmental groups united on common ground instead of bickering over their differences.

“I was the angry environmentalist, [but] I’ve learned we need to take care of both our workers and our environment. Yelling back and forth just doesn’t work,” says retired teacher Diana Strablow, a member of the Sierra Club and the Clean Air Coalition.

As it strengthened its own internal bonds, the Alliance also worked to strengthen relationships within the community and develop a shared community vision. To find out what Tonawandans valued, the Alliance involved hundreds of residents in a series of community meetings, door-to-door surveys, voter-registrations, and workshops about electric utilities and energy markets.

Through the work of the Huntley Alliance, more than 1,500 local stakeholders worked together to craft an inclusive, equitable blueprint for their town. In July 2017, it turned its 64-page Tonawanda Tomorrow plan over to town officials. That autumn, the town government adopted the multi-pronged plan. That vote affirmed a united commitment to transforming the Huntley power plant site from a liability into a community asset.

“I’ve never seen a group of people who were so diverse work together,” says Bill Conrad, town board member, high school teacher and Tonawanda native. “We had citizens, businesses, government officials and environmental activists. It was kind of magical.”

An Obama administration initiative aimed at aiding communities distressed by the demise of coal provided $160,000 to craft the Tonawanda Tomorrow plan. Federal POWER (Partnerships for Opportunity and Workforce and Economic Revitalization) funds were distributed by the U.S. Commerce Department’s Economic Development Administration.

In a nutshell, the plan is a comprehensive and pointed roadmap, complete with naming and holding the groups and people responsible for each element, the necessary funding and the timeline for completion.  It lays out how Tonawanda can sustain and add to its tax base, provide safe and family-sustaining jobs, improve community health and allow Tonawandans better access to a waterfront along the Niagara River.

For a year after the plan was produced, a twelve-member team was advising town officials on economic development initiatives along the waterfront corridor that could help Tonawanda regain the tax income it lost when Huntley was down-sized and then shuttered. That changed when town officials opted to no longer convene the team. Still, Clean Air and partners from organized labor, education, business and other organizations continue to advance a transition in Tonawanda that addresses economic inequality and implements the goals of the Tonawanda Tomorrow plan.

Although the residents of Tonawanda were ready to fully engage in transition activities, they also realized that their community couldn’t sustain that work or fund transition on its own. For decades, Huntley had provided electricity far beyond the town of Tonawanda’s borders, so the Alliance petitioned the New York State Legislature to help fill the gap created by the loss in the tax base that would decimate the schools and government services. Their testimony convinced lawmakers to create an Electric Generation Facility Cessation Mitigation Program in 2016 – the first in the nation.

The Legislature created a $30 million gap fund to assist communities throughout the state that were struggling with a power plant shutdown. Annual payments help local governments cover lost tax revenue. Payments span a seven years time table and decrease a specified amount from the initial year. By 2019, the fund had grown to $69 million and expanded to include all electricity-generating plants in the state, no matter what the power source. The state is sourcing dollars for the fund from the Regional Greenhouse Gas Initiative, a market-based cooperative effort in the Northeast to cap and reduce carbon emissions from fossil fuel-fired power plants.

Tonawanda received $1.6 million from the fund in 2016-2017 and $1.4 million in 2017-18. That money allowed the town to keep the lights on, collect the garbage and continue to provide other essential municipal services. Without the gap funds, town government officials feared they would have to decrease or privatize some services.

And Tonawanda is not the only town to benefit from the New York gap fund. Thus far, the state has awarded $26.1 million in grants to the towns of Tonawanda, the Kenmore-Tonawanda Union Free School District, the City of Dunkirk, Chautauqua County and Dunkirk City School District. What’s more, other states across the country are looking at New York’s gap funding model as a potential solution for supporting their own coal transition communities.

For more examples of state transition funds and information about how to create them in your state, visit the Just Transition Fund’s Policy webpage.