The Fund focuses on coalfield and power plant communities throughout the country. We prioritize support for coal communities experiencing the most economic distress and take into account equity factors that make transition an even greater challenge. Our decision-making draws from scientific analysis. Every two years, we conduct a data-driven evaluation of coal-affected communities. This evaluation uses data from a range of sources to consider both the level of economic distress and equity factors in each community. We also consider political factors such as the existence of climate-friendly policies at the state level as well as nonprofit capacity on the ground. In all that we do, we strive for equitable and inclusive solutions to the coal transition.

The closure of coal-fired coal plants is impacting communities across the country. Plant closures not only result in direct job loss, but also cause significant reductions in public revenue when plants are removed from local tax rolls. According to the Energy Information Administration, more than 130 coal plants have closed since 2015, with many more closures expected in the next few years. Already, nearly 40 percent of the U.S. coal fleet has been announced for retirement, and the economic recession caused by the COVID-19 pandemic will make closures happen even faster in the months and years ahead.

Based on our latest analysis, we’ve identified the following priority communities as priorities for investment in 2021:

Appalachia’s natural landscape is known for its narrow ridgelines and steep valleys known as hollows. But three centuries of coal mining has resulted in the loss of 500 mountains, and the region has endured huge coal-related losses. In the mid-20th century, the industry employed 150,000 people, but changes in technology and now the move away from coal have caused major job loss. In fact, 87 percent of the nation’s coal-related job loss has occurred in Appalachia. According to the Appalachian Regional Commission, the region lost more than 23,000 jobs between 2011 and 2015 alone, as production plummeted by more than 40 percent to reach its lowest historical levels. Although mechanization had caused job loss for decades, the steep decline of coal production and closing of power plants has been a wake-up call for a region long dependent on a single industry. A just transition will require long-term investments in creative, community-based solutions to build a diversified economy that creates jobs, retrains workers, and builds local wealth.

For thousands of years, Native Americans have lived in the Powder River Basin, which stretches across Wyoming and Montana. Homesteaders began ranching and farming there almost 200 years ago. But the area has in recent generations been best known for its energy production, and it supplies 40 percent of the nation’s coal.

The region is beginning to reel as both coal plants and mines close. Job losses are particularly devastating for communities in Wyoming. In the coming years, industry predicts the state could lose upwards of 10,000 coal-related jobs.

More broadly throughout the West, tribal communities and those dependent on federal coal are struggling. For example, in the Navajo nation, 700 jobs were lost with the closing of the Navajo Generating Station and Kayenta mine. The loss of coal royalties and plant lease payments meant the Navajo and Hopi tribes lost roughly 25 percent and 80 percent of their budgets, respectfully. And 15,000 homes are without power. The loss in tax revenue is especially acute for these committees, where 75% of the population lives below the poverty line. Efforts to rebuild coalfield communities in each of these places are threatened by the immense legacy liabilities that coal leaves behind.

2021 Priority Communities in the West:

Across the Midwest, coal communities are experiencing a rapid shift away from fossil fuels, creating a regional need for long-term planning, community investment, and policies that enable a just transition.  The region has a long and deep relationship with coal. In fact, coal mining began in this region in 1820. But as closures accelerate, the efforts some state legislatures are making to keep the industry afloat are not enough to avoid the inevitable transition away from coal. According to a report by the Institute for Energy Economic and Financial Analysis, in 2018, the Illinois Basin - which straddles southern Illinois, southwest Indiana, and western Kentucky - produced about 14 percent of the total thermal coal mined nationally. In the last year, however, the pace of closures has accelerated, with five coal mines idling or closing, mining companies filing for bankruptcy, and 20 of the region’s 38 coal plants announcing retirement dates for some or all of their units. If these trends continue, it is predicted that within the next 20 years the industry may vanish from the region. As more closures are anticipated throughout the region, identifying each priority community’s challenges and tapping into their unique assets and opportunities will be essential to shape a just transition away from coal. 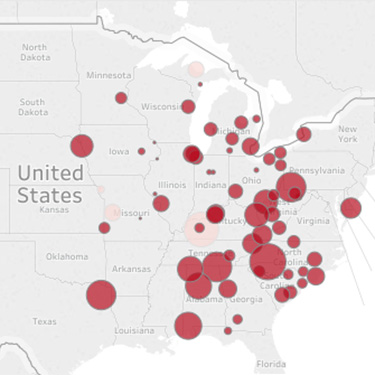